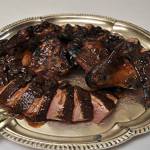 Episode 1: Beef, Pork and Chicken, Oh My!
Courtney gets wrecked by a Giant Beef Rib in Texas, feels the burn with some Hot Chicken in Nashville and tries Tamarind Lamb Chops from an award-winning chef.

Episode 3: Meat on a Doughnut
Courtney Rada spends big money on a sandwich in Long Island, New York. Then she finds a classic sausage sandwich at an iconic location in Chicago and cooks up some short rib dumplings with Iron Chef Stephanie Izard.

Episode 5: The Meatiest Game in Town
Courtney Rada gets her pork chop on in Nashville before heading to Chicago for a whole smoked goat. She also makes a stop in Washington, D.C., for a burger party with Chef Spike Mendelsohn.

Episode 6: Meaty Classics with a Twist
Courtney gets her hands on some meaty goodness, from hot chicken and French toast in Nashville to the steak to beat all steaks in New York City.

Episode 8: Welcome to the Meat Party
Courtney Rada snacks on a decadent burger in Chicago and swings over to New Jersey for oxtail stew. In Seattle, she eats octopus two ways before heading down to San Francisco for California fried chicken with Chef Tyler Florence. © 2016 FileNiko. All rights reserved. Made with love in Isfahan, By Nikanonline.